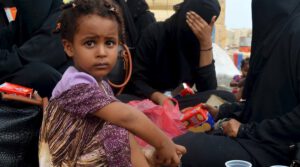 The 24th of June is UK Armed Forces Day and no doubt the assorted Colonel Blimps in our midst and wannabee ‘action men and girls’ will be out in force.
The main UK ‘National’ event is taking place not far from us 80 miles across the sea from the Isle of Man in Liverpool. Bizarrely what’s being termed a military ‘fun day’ for families is being sponsored by BAE systems.
BAE when not getting plans to cull troublesome birds around their warplane death factory at Warton turned down churn our warplanes and spare parts to keep those well known sponsors of terrorism Saudi Arabia in business.
Saudi Arabia of course is engaged in destructive aggression by air against its neighbour Yemen. In that country many families have been killed or wrenched a part by the merciless bombing campaign.
So as British families enjoy the fun at Armed Forces day on Merseyside spare a thought for the families in Yemen grieving now and everyday because of weapons supplied by ‘fun hosts’ BAE systems.
Image: No ‘fun day’ for Yemeni victims of British supplied warplanes!
BERNARD MOFFATT
Public Relations Officer Mannin Branch
Issued by: The Mannin branch of the Celtic League.
21/06/17

United Kingdom ‘In The Dock’ Over Chagos Islands