The Celtic League has forcefully protested the treatment of two United States peace activists who were detained after an incident at Shannon Airport in Co Clare in March.

The Convenor of the Celtic League and the Secretary of the International branch of the League subsequently attended and observed a HIgh Court hearing for the two men members of the US ‘Vets for Peace’ organisation.

A copy of our letter of protest to the Irish Department of Justice is set out below:

I write to express the concern of the Celtic League at the treatment of two peace activists by the Irish Justice system.

The circumstances are that on 17th March 2019 two members of the US ‘Vets for Peace’ organisation went into Shannon Airport to attempt to inspect US military planes suspected of carrying troops and arms. They were arrested and held, with bail being refused. The charges were trespass and damage to fencing. Their legal team initiated a High Court Action to achieve bail.

A High Court hearing was heard in Cloverhill, Clondalkin, Dublin on 28th March .The Convenor of the Celtic League, which is an officially accredited United NGO, and also the International Secretary of the League attended the Court and observed the proceedings.

The two men, Ken Mayers (82) and Tarak Kauff (77) offered sureties of €5000 euros each and asked they be allowed to return to the US. They guaranteed they would return to Ireland for the trial. Their barrister read extracts from the US Vets Manifesto which emphasised the peaceful nature of their organisation and protests. The prosecution reiterated the charges and said that the damage caused to the fencing was €2,500. Passports had been taken and they objected to bail on grounds of a flight risk (despite the assurances given to return) .

The High Court Judge after some discussion said he would not grant bail unless there was an address in Ireland for the two men. He rejected the guarantees of the two men to return if allowed home. An Irish national and peace campaigner, Ex-Commandant Edward Horgan, of the peace group ‘Shannonwatch’ supplied an address in Limerick. The Judge granted bail for sureties of €2,500 each. The bail was paid by Ed Horgan. The men were released in Limerick in the evening.

I have no doubt you will aver that the jurisdiction of the Court is independent of politics but observing the events externally, taking account of the open organisation to which the men belong and the nature of the offence the decision of the Court is draconian, intolerable, unjust and smacks of political overtones.

The two men have effectively under open arrest in Ireland until the date of their trial which could be in months or years.

Quite frankly this is more the action of some despotic country than a State which prides itself on being a modern European democracy.

As an aside I would contrast the zealous manner in which the Irish Justice system is pursuing these two individuals with the blatant inertia of the State when we formally lodged a complaint with An Garda Siochana at Shannon some years ago about the use of Shannon Airport for extraordinary rendition (that complaint for information should be on file). In that instance of course we were not speaking of ‘€2,500 damage to a fence’ but the carriage via Irish Airports of abducted individuals to be tortured or worse.

I hope the Department of Justice will get a grip on this intolerable situation and ensure that prior to a substantive trial a form of ‘exile’ in Ireland is not applied to these two United States citizens whose only ‘crime’ is a commitment to world peace.

The Celtic League as indicated is a UN accredited NGO and committed to antimilitarism. Its Irish branch is affiliated to the Peace and Neutrality Alliance (PANA). The Celtic League intend to be active in this matter.

Image: The two US ex servicemen and members of Veterans for Peace Ken Mayers (82) from New Mexico and Tarak Kauff (77) from New York – they were originally refused bail at Ennis District Court 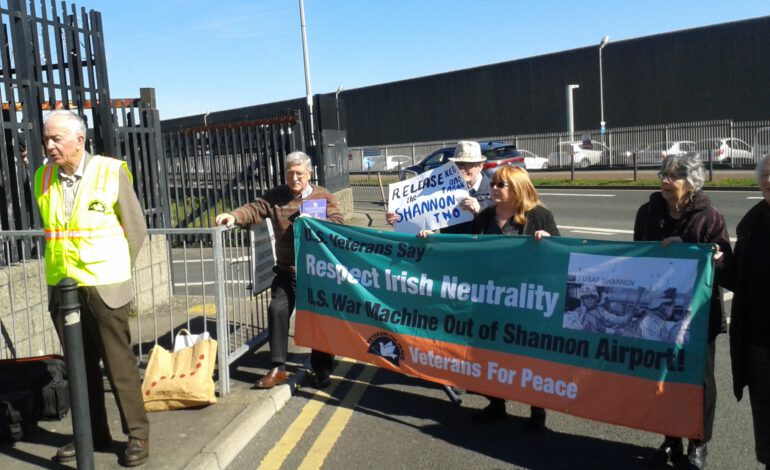