Celtic League Mannin branch voiced opposition for the training of RSAF pilots at RAF Valley who also use the Civil Airport in Mann a few years ago. The Branch policy was subsequently adopted by the League at its Breton AGM in 2019. We oppose the training of Saudi Aircrew who are engaged in an indiscriminate bombing campaign in Yemen. Just in the last few weeks twenty children have been killed in bombing raids and many other men, women and children injured:

However League concerns about Saudi Arabia and it links to Mann go back more that a few years in fact in June 2000 we published press notice pointing out that the recently appointed Lt Governor of the Isle of Man, Air Vice Marshal Ian Macfadyen (Rtd), when he was prompted to Air Vice Marshal in 1994 was appointed the Director General of the Saudi Arabia Armed Forces Project a position he held until he retired from the RAF in 1999 shortly before becoming Lt Governor of Mann. You could say he swapped one feudal role for another.

The ‘project’ is effectively the ‘vehicle’ that via the use of British Service personnel and contractors keeps the Saudi Air Force flying and indeed has enabled them to murder and maim thousands of Yemeni civilians in the past five years. The British government say of the ‘project’

“The Ministry of Defence Saudi Armed Forces Projects (MODSAP) is responsible for fulfilling the UK Government’s obligations under arrangements signed between the UK and Saudi Arabian Governments covering the supply of defence equipment and services to the Saudi Armed Forces under the Saudi British Defence Cooperation Programme and the SALAM Project.

“As its title suggests, MODSAP is part of the UK Ministry of Defence and is staffed by both Service and civilian personnel. Its members are based in various locations across the UK and Saudi Arabia.

“MODSAP’s principal roles are to monitor the progress and performance of the SBDCP and SALAM prime contractor (BAE Systems), so that the requirements of the Saudi Arabian Government are faithfully met and contracted programmes of work run smoothly both technically and financially, and to provide a point of contact for the Royal Saudi Air Force and Royal Saudi Naval Forces.”

So there you have it, a ‘smooth’ killing machine of civilians! 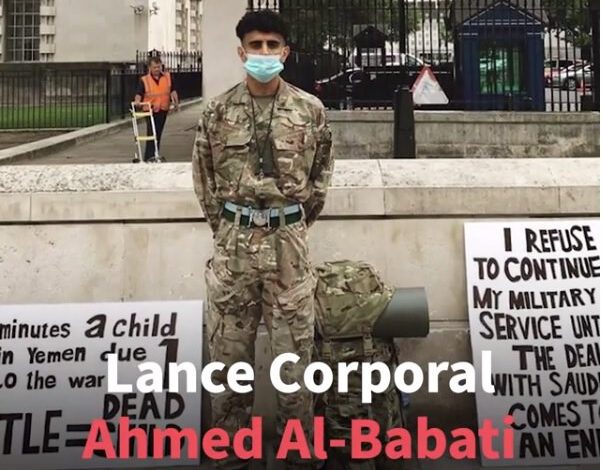 Detained soldier a prisoner of conscience