Éire (Ireland) remains divided. The Civil War of 1922-23, which some term a counter-revolution, set the tone for the following century. An alliance of state, Church and big business and large farmers quashed any hope of radical change. Practicing an economic nationalism, within the strictures of capitalism, the state’s economy remained largely stagnant, despite some investment in indigenous industries. In the 1930s, the Twenty-Six Counties faced an economic war with the UK in the 1930 when Land Annuities were withheld. The 1950s was a decade of massive emigration, with some 50,000 people a year leaving, many of them helping to rebuild post-War Britain. In reaction to economic stagnation, and following in the mould of many post-colonial states, new economic programmes were devised in the 1960s which sought to attract foreign capital. This improved the situation somewhat by stymying the flow of emigration and generating some optimism. But the over-reliance on this low tax Foreign Direct Investment model has produced an imbalance in the economy with an over-reliance on multinationals, particularly for the US. In turn, this has wedded the state to US imperialist interests.

Throughout the twentieth century housing was poor, although mass building of council housing did take place in the 1930s and 1950s under Fiann Fáil governments. However, many slums remained. In the 1960s direct-action groups such as the Dublin Housing Action Committee emerged. There were many social problems and issues to be addressed.

In 1973 the Republic joined the EEC. This was opposed by many who saw it as an abandonment of Irish independence (benefiting only the agricultural sector and big farmers) and which subsequent Treaty changes (Nice and Maastricht) entrenched.

In the 1980s hard times and emigration returned, this time to countries much more distant. The answer to these problems, many in government believed, was the deregulation of the economy, particularly banking. This would offer plenty of cheap credit to buoy the economy. In tandem with worldwide booms in technology and pharmaceuticals a local so-called “Celtic Tiger” boom emerged, much of it built on the sand of over-extended mortgages on property. Consequently, the late 2000s saw a worldwide recession was exacerbated in Ireland as the Dublin Government sacrificed its citizens and lumbered the country with a debt of €63 Billion euros rather than  default on EU (largely German) bondholders. A policy of austerity was introduced to pay for these bailouts, filtering wealth from ordinary people upwards to pay for the banking debt of the super-rich. In the mid-2010s an anti-austerity movement which had been bubbling under the surface for a number of years through the anti-Bin Charges, anti-Property Tax campaigns gained major traction with the anti-Water Tax movement. The movement was one of the only rays of light on the socio-economic front with the government having to shelve plans to introduce the tax.

Now, however, the people of the state are wracked by the cost-of-living crisis, housing costs and lack of housing, excessive rents and lack of suitable and affordable rental accommodations affecting not only many families but also third level students. Provision of an adequate level of health care is also threatened with many young hospital doctors quitting and emigrating to countries where working conditions are better, while teacher shortages cause chaos throughout the education system.

The Irish language, Gaeilge, has a broad base in the Republic. Some 1.7 Million people stated in the latest (2016) Census returns that they could speak Irish. However, the number of people who use Irish on a daily basis is dramatically lower with only 73,803 using. A large proportion of these would be in schools. The language is a necessary subject up to Leaving Cert. level.

Despite the sterling efforts of the Gaeltacht Civil rights since the late sixties and its successor community organisation there has been a continual decline in numbers speaking Irish in the designated Gaeltacht areas, with some local activists putting the figure as low as 30,000 across all areas. Between 2011 and 2016 many Gaeltacht areas, as a result of austerity and enforced emigration, saw the number of daily speakers decline by 10% and more, thus threatening the linguistic survival of these areas.

An Official Languages Act was passed in 2003 which compels all public bodies to provide services in the Irish language. However, many bodies ignore this, and the Irish Language Commissioner has reported on this regularly.

Irish was declared an official language of the EU in 2007 (the only Celtic language that far to get such recognition). This did not result from Government action but was achieved after a long activist campaign.

There have been some positive developments in modern media with the first mobile phones with Irish as a menu option on them being offered by Samsung in 2008.

The Irish Language TV station TG4 continues to flourish. In addition to Raidió na Gaeltachta (available on Internet also) there is now Raidió na Life in Dublin and Raidió Fáilte in Belfast.

A particular success story was the growth of Irish medium primary and second level schools. This was aided by the organisation Gaelscoileanna, founded in 1973. In the last decade of the last century there were 5 -6 primary schools staring every year. However, as the Department of Education took steps to curtail this growth it is now difficult to get permission to start new schools. A re-energised movement willing to take risks, and act outside the parameters set down by the state as the early founders did, is much needed.

In the North, the language was effectively outlawed in schools until the 1990s. Despite this there were significant developments in Belfast with the founding of a Gaeltacht area (Shaw’s Rd), followed by a primary school and a second level school (there is now numerous primary schools throughout Belfast and the Six Counties, while a Naíonra and GAA club has been established in the staunchly Unionist East Belfast, a sign of a changing landscape in the North).

Activities Of The Irish Branch Over The Years

Colin and Cristl Jerry (seen here with their family) performed at  a concert organised by the Irish Branch (1976) on their way to the Lorient Interceltic Festival, they organised Manx groups going to the festival for over twenty years. 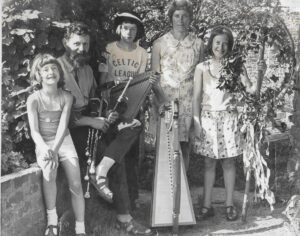 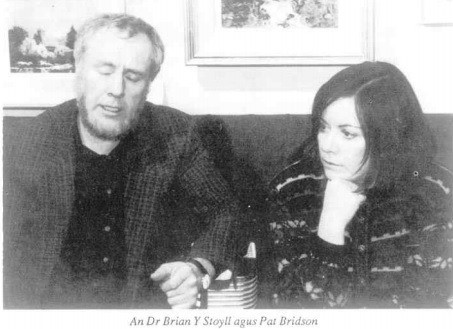 Supply of flags of the Celtic Nations for the permanent exhibition of International flags in the Mariners Church, Dún Laoire. 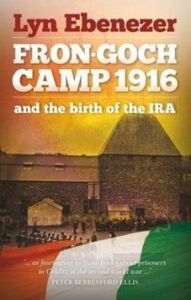