Ken Mayers and Tarak Kauf are presently on week 2 of their walk to the Border. They will be in Ennis Circuit Court this coming Friday 8th November. Their case should be transferred to Dublin Circuit Court on that day, but the prosecution may seek to further delay this process so PANA have called for as many supporters in court as possible. Their appeal of their bail conditions cannot be made to the High Court until after their case has been transferred to Dublin.

Bernard Moffatt, Asst General of the League, has written to the Irish Minister for Justice calling for his intervention so the men can be released home for Christmas.

The Minister for Justice and Equality   2nd November 2019

I am sure you are aware of the case of the two men (named above) who are currently detained in Ireland on bail with their passport surrendered. I have been asked to write to you formally by the Convenor and the General Secretary of the Celtic League to seek your intervention so that these two men can return home to spend Christmas with their families.

The two have made it abundantly clear that they will return to face the full trial over the allegations against them indeed they say they welcome the opportunity to justify their actions and ‘have their day in Court’.

Many representations have been made on behalf of the men and I understand their plight was even raised with the President of Ireland on a recent visit he made to New York.

I do hope that the Irish government will Intercede to facilitate what is a basic humanitarian appeal. I appreciate you may aver that matters pertaining to the judiciary are out with political competence. However, Minister I think if we ‘call a spade a spade here’ the plight of these men is hedged around with politics.

I do hope the Irish government has the good grace and good sense to grant the men’s request to return home and I feel sure as a respected and influential member of government you can facilitate this. 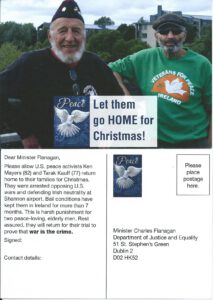 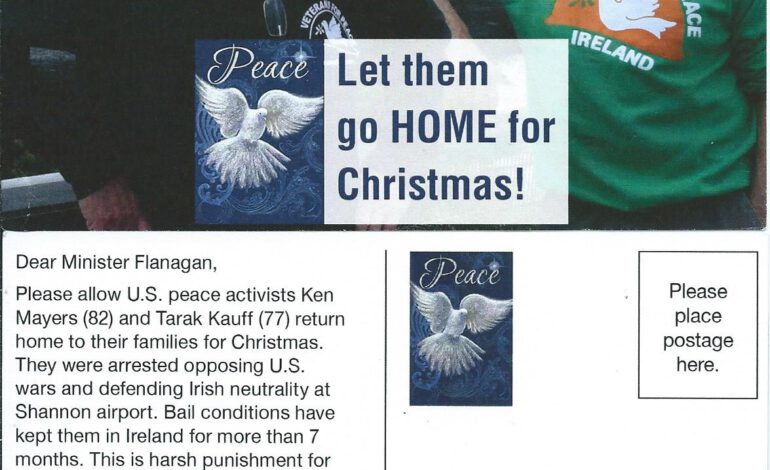