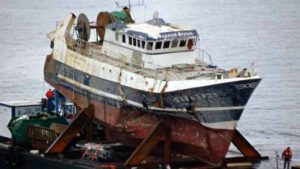 INQUEST in January-2017 in Britain

More than ten years after the Breton trawler, the Bugaled Breizh, sank off the coast of Cornwall, France’s top judicial Court (Court of Cassation) brought the French justice system into disrepute by rejecting an Appeal lodged by Thierry Lemetayer, the son of the mechanical officer who drowned in the incident, and Michel Douce, the owner.  However, all hope is not lost following the fourth pre-inquest hearing at Truro City Hall in Cornwall, and the strong determination of Coroner, Emma Carlyon, who made a decision to open an Inquest in January 2017.

January 2004: The Bugaled Breizh, a trawler from the Guilvineg Maritime HQ in Brittany, sank within 90 seconds in the open sea off Cape Lizard, in Cornwall with five men on board. This dramatic tragedy had all the hallmarks of several similar sea accidents that occurred during the previous decades, in the same fishing zone involving boats from the Celtic nations.

The Deviousness of French ‘Justice’

After drawing attention to the Seattle Trader, a tanker from the Philippines, the French authorities accused the Breton sailors of negligence or incompetence, saying that their net was victim of: « a soft lock », that is to say that the net was locked in a sand bank! This hypothesis is highly unlikely according to marine specialists. Furthermore, the Breton sailors knew the area as well as the meteorological conditions. Soon after the shipwreck we learnt that this zone, where the drama occurred, was used as training zone for NATO nuclear sub-marines. Therefore, the families of the victims asked that the truth surrounding the circumstances of the accident should be uncovered. Carn magazine has reported on the unfolding developments since the tragedy occurred. In issue after issue*, the circumstances of this surrealist trial did not bestow any honour on the French Navy nor the French Justice system, instead we see how closely they are in line with French political manoeuvrings.

The Supreme Court of Appeal under the Political Power

After the verdict of « non-valid » was decided by the Appeal Court of Roazhon on the 25th May 2015, on the grounds that nothing could be proven that the Bugaled Breizh was sunk by an SMNLE/NSML (Nuclear Submarine Missiles Launcher). On the 21st  June, the Supreme Court of Appeal of the French state rejected the appeal by Thierry Lemetayer, son of the mechanic’s officer and of the owner of the Bugaled Breizh, Michel Douce, thus endorsing the « non-valid » decision of the Appeal Court of Roazhon. Therefore, they buried, “The last try for France to prevent the families getting to know how their loved ones disappeared”, according to Me Tricaud, advocate for the famillies. This decision proves that the French Justice system, when needed, lacks independence from the political power, when it comes to « State-Reasons »!

Fourth Hearing of the Pre-Inquest in Truro.

If there is no more hope from the state of the so-called « Human Rights », i.e. France this is not the case in Britain, where a pre-inquest in Truro, Cornwall, is underway. The Coroner, Emma Carlyon, has already contacted he M.O.D. (Minister of Defence) during the hearing of July 18th. The M.O.D. sent at least seven delegates and their advocate. The Coroner E. Carlyon took the opportunity to list a lot of similar accidents which occurred in the same fishing-zone. Some of them are well-known from the Celtic League Military Monitoring Campaign work by Bernard Moffatt over many years. Alan Ayres and Joe O’Connor co-owner of the Pescado, registered at Plymouth, were saddened to hear the name of their boat, which sank on the 25th  February 1991, with six sailors on board. Anyway, it is hard to accept the conclusions of French Justice, when only a few days later another Breton trawler, the Daytona, from ST-Brieux HQ, had a narrow escape when its net was snagged by the Portuguese submarine « Tridente » which was training with the royal navy a few miles from Cape Lizard, nearby the shipwreck of the Bugaled Breizh. Christophe Houart, the owner of the Daytona, said, “An extra nautical knot and the submarine would have sunk my boat along with the crew. That made me think of the Bugaled Breizh”.

The Inquest will be open soon!

Coroner Emma Carlyon estimated that she required more substantial evidence for the upcoming inquiry which will be under British jurisdiction. This procedure will be delayed until December, when Me Tricaud et Duhamel, the advocates of: « the civil parties », T. Lemetayer and M. Douce, will meet the Coroner by Visio conference.

The Inquest, itself, should open next January. Hopefully, British justice will be more honest than the French one. If not, the families intend to keep going and take the opportunity to lodge their case in the European Law Court for Human Rights against the French state.

Its a hard living for fishermen without the under sea menace