I was saddened to hear of the death of Brian Stowell a great Manxmen and pivotal figure in the Manx language revival (report here from Manx Radio):

Brian was active for many years in a number of inter-celtic organisations including the Celtic League, the Celtic Congress and the Connolly Association.

As a physicist he had, like many of his generation, to seek employment off Island working for the Atomic Energy Authority and then as a lecturer in Liverpool for many years where he lived (on the Wirral). During that period he would always return to the Island for holidays and I and my late wife Dee were often pleased to welcome him and his colleague Dr George Broderick at our home on the Island for visits particularly during the festive season. He was a very accomplished singer and together with Dr Broderick and often the late Paul Lebiedzinski were often to the fore at the many vibrant sessions at that time in Port Erin, Ramsey and Peel.

His appointment as language development officer for the Manx language enabled his return to the Island where he threw himself into his work. His interest in Manx started when he was at High School in Douglas and indeed he participated in the programme to record the last native speakers.

For many years Brian wrote the Manx language article for CARN the Celtic League journal and as often the topics were related to International events this is probably the richest source of contemporary comment in written Manx.

As indicated he was also prominent in the Celtic Congress and indeed I referred only yesterday to the League meeting at Landernev, in Brittany. in 2006 where we also bumped into Brian attending a Congress event in the Country.

Brian was a good nationalist all rounder. He performed music and sang was politically active and featured in several films about the language and the television programme made by the Irish filmmaker Bob Quinn (link below).

He was also very concerned about environmental issues and facilitated my first conference ‘outing’ for the Celtic League on the nuclear industry via a Connolly Association conference at the Shaftesbury Hotel Liverpool in June 1985 on the threat posed by Sellafield to the Irish Sea.

There will of course be a full tribute to Brian in the next issue of CARN but in the meantime my personal thoughts are with his many close friends and family at this sad time.

Image: A still from the RTE film where Brian performs with David Fisher and Dr George Broderick in the Central Hotel Peel which at that time was a hot spot for Manx music and language. 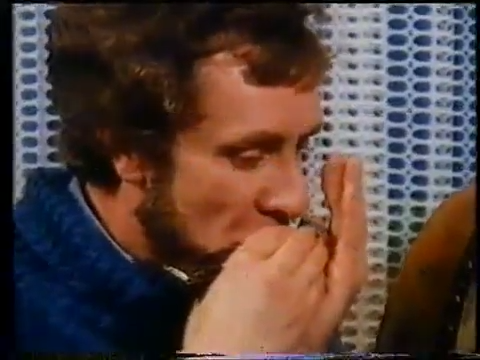 Isle of Man: It’s the topic in boardroom and bar room

The climate its news